The Four Worlds of the Qabalah 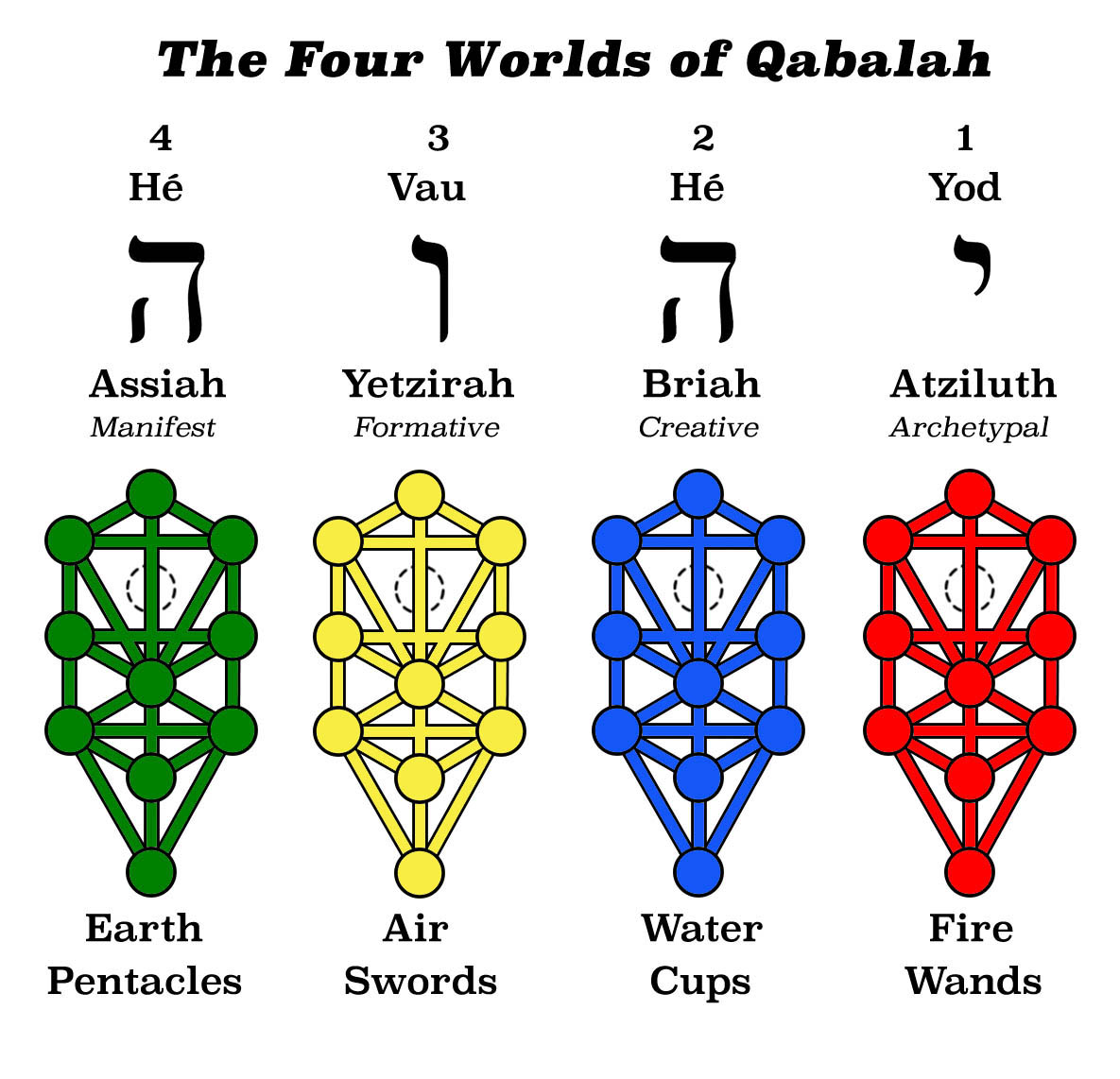 Just as from Kether to Malkuth there is a successive movement from the abstract to the manifest, so there is in the Kabbalistic worlds from Atziluth to Assiah:

To the upper right is the traditional view of the Four Worlds mapped onto the sefirot. Following the Kabbalistic holographic principle, each world maps onto the Tree, but each world is a full Tree in its own right.

To the lower right is an alternative modern view of the Four Worlds mapped onto the sefirot. This view maps onto the construction of the Tree as four adjoining circles, and shows the worlds overlapping and interpenetrating, a view shared with the Extended Tree (bel 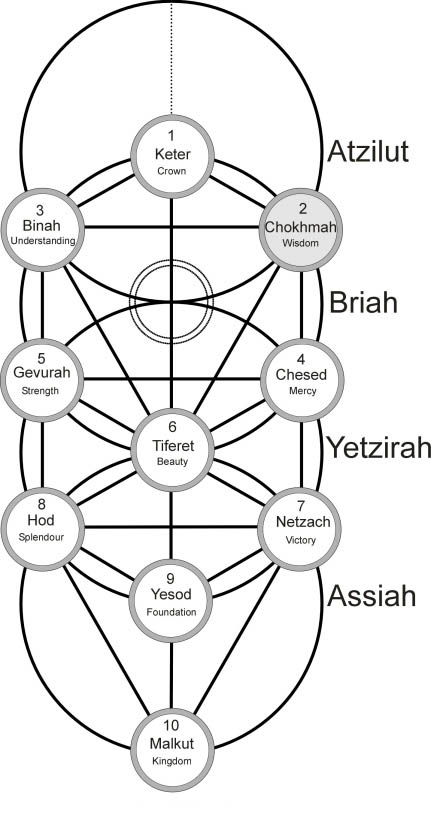 The Extended Tree, a view that extends the Tree of Life through four worlds in a way that highlights deep connections between sefirot. Keter, Tiferet and Malkhut overlap, as do Da’at and Yesod, Chokhmah and Netzach, and Binah and Hod. This view illustrates the flow of energy between worlds, and clarifies the cognitive transition from one world to another.

Below right shows each element of the Extended Tree superimposed on each other to form a portrayal of Jacob’s Ladder. 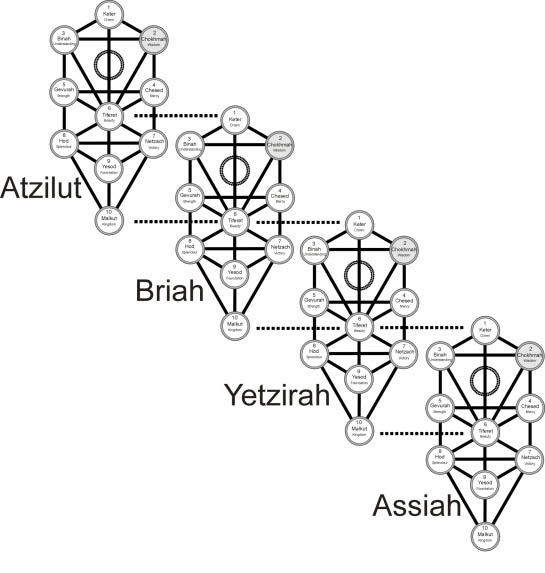 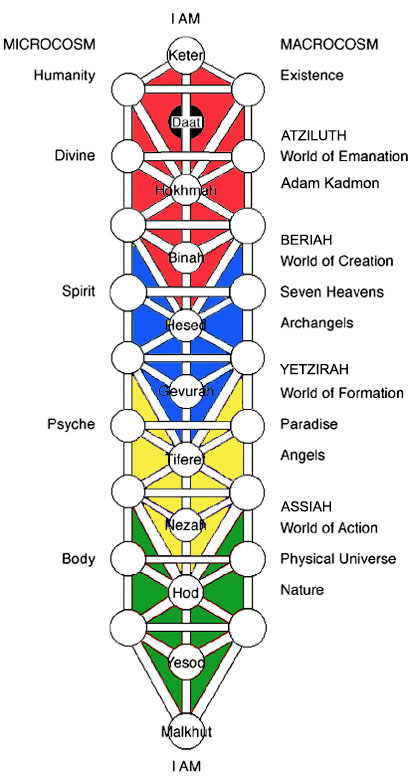 There are ancient traditions of ascent within Judaism, one of the best known being Jacob’s Ladder. Genesis 28:12 tells that Jacob settled down to sleep, rested his head on a stone and had a dream of “a ladder set up on the earth, and the top of it reached to heaven: and behold the angels of God ascending and descending on it.”

Jacob‘s ladder can be thought of as a metaphor for the experience of prayer and meditation. Prayer and meditation constitutes the ladder through which a human being climbs from his or her earth-bound existence into deeper states of consciousness, until touching the heavenliness at the core of the human soul. This technique is widely used and practiced in the East and is known as Kundalini Yoga

The identification of the Tree with Jacob’s Ladder (also known as the Chakras) suggests that human beings have the power to ascend to the divine in the same manner as the angels – the reverse process of emanation provides the path of return.

The first and highest of the Four Worlds, corresponding to Fire of the elements, Chaya (living essence) of the soul, and Yod (י) of the Tetragrammaton ( God's 4 letter name יהוה), is called Atzilut. The term Atzilut is usually translated as “Emanation”, but literally means “closeness”. This is the “World”, or primordial Substance which is the first emanation out of God’s unique and pure Essence, and is therefore the “World” closest to Divinity. This Substance corresponds to Philosophic Fire, which – as opposed to literal fire – is best described as “living light”. The Substance of “living light” is intangible and has no definite, specific Form, but its dynamic qualities of vitality and illumination are distinguishable. Life and light are the two qualities that must be postulated as being prevalent in any Divinely creative act. Since these qualities can be discerned as having existence distinct from Essential Divinity, the emanation of the primal “living light” (Substance) is the preliminary phase of Divine Creation. This phase is what is called Atzilut. As this is the primal spiritual Substance from which all other matter evolves, it corresponds to that which is called Chaya (living essence) in the evolution of souls.

The next phase, corresponding to Water of the elements, Neshamah (higher awareness, higher self) of the soul, and the first Heh (ה) of the Tetragrammaton, is called the World of Briah, which translates as “Creation”. Like Neshamah (higher self), the function of Briah is to define specific Form and function in the amorphous energy of Atzilut. This is the evolutionary stage where matter begins to condense, “solidify”, and to acquire specific, distinguishable qualities of it’s own. This is because the Divine Unity is indivisible. Specification, which is division from that Unity, cannot be classified as Divine because the condensation of primal Substance into specific Form begins to occur at this stage. Thus, Briah corresponds to Neshamah, the stage where the human soul acquires individual personality and identity.

It must be understood that Briah (Creation) is a purely embryonic stage where specification and differentiation are applied only in an abstract sense, identifying the potential function of specific Forms and forces. The actual separation and division of these different qualities occurs in the next phase of evolution, called Yetzirah, which literally translates as “Formation”. The world of Yetzirah corresponds to Air of the elements, Ruach (Spirit) of the soul, and Wau (ו)of the Tetragrammaton. As Air is generally associated with the intellect, this is the stage where differentiation of qualities (analysis) is applied to matter, and where these qualities are combined (synthesis) and Formed into archetypal conceptual compositions with a view towards various specific applications. This is the function of the human intellect with which an individual theoretically experiments with various courses of action with the intellect and comes to a decision that the individual thinks will best serve the primal motivation or desire. Yetzirah (formation) corresponds to Ruach (Spirit) in that this is the stage where a specific compound is identified and given personal existence in the same way that an individual human personality is given identity and necessitates a physical vehicle.

Here we come naturally to the fourth and final stage of development, called Assiah, which translates as “Action”. The World of Assiah corresponds to Earth of the elements, Nefesh (the Animal Soul, body soul) of the soul, the human body, and the final Heh (ה) of the Tetragrammaton. Assiah is the actual physical universe in which all things live and carry out their functions. This is the final proving ground where all the preceding Worlds and Spheres are actualized. The results are judged according to how well they perform their intended purpose, which is conceived in Briah and gestates and takes Form in Yetzirah. In correspondence, the human body is the proving ground of the soul, where the soul is evaluated according to how well it fulfills it’s intended purpose (Thelemically, the Higher, or Pure, Will).

The fourfold aspect given to each sefira by its existence in each of the four worlds allows application of the Kabbalah to fourfold systems such as the western elements (Fire, Air, Water and Earth), the letters of the Tetragrammaton (Hebrew Name of God: Yod [י ], Heh [ה], Wau [ו], final Heh [ה] ), the Jungian functions and the Minor Arcana of the Tarot. The latter is very important in the Western Kabbalah: each of the four Tarot suits contains precisely ten numbered cards (as do our modern playing cards, which are derived from the Tarot), and so a Tarot deck contains a representation of the Tree in each of four worlds. The four court cards in each suit offer a further fourfold correspondence, and each of the 22 Major Arcana cards corresponds to one of the 22 letters of the Hebrew alphabet and to one of the 22 paths joining the sefirot on the Tree of Life.